We'll be groovin' at OTBC! Come spend Sunday Funday with us in Temecula! $5 cover, 21+ 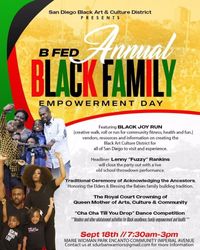 Grab your dancing shoes and head to OTBC to spend your Saturday afternoon with great people, yummy libations and STELLAR MUSIC! Hope to see y'all there! $5 cover, 21+

Born in Cleveland, Ohio, Lenny “Fuzzy” Rankins spent several years of his childhood in Wilmington, Delaware.  He was introduced to singing and playing musical instruments at church, where he had the opportunity to play with various gospel groups, such as the Gospel Ambassadors and the Shield Brothers.  Fuzzy moved to York, Pennsylvania at age 11 and continued playing in the church and touring with gospel groups.  By age 12, he had performed in shows featuring artists such as Shirley Caesar, Al Green, Five Blind Boys, Mighty Clouds of Joy, Gospel Keynotes, and James Cleveland.  At age 19, Fuzzy formed God’s Angels and the group enjoyed recording, traveling and performing in churches throughout the South and along the East Coast.

Fuzzy moved to California in 1990 to further pursue his music career.  He discovered the diversity of the blues when he met blues and jazz performer Fro Brigham, formerly associated with Louis Armstrong.  Fuzzy played guitar with the Fro Brigham Preservation Band.  In 1992, Fuzzy formed his own blues band, Fuzzy and the Bluesmen, and recorded his first blues album titled Not Gonna Work This Time.  The group’s popularity grew quickly throughout Southern California and, in 1993, Fuzzy was presented with the Jim Croce Blues Award.  That same year, the album was recognized by the San Diego Music Awards in the Best Blues Album category.  Blues releases Good Lovin’ and Take A Brotha Home followed.  Each of the CDs were nominated for awards and received airplay.

Fuzzy has made several television appearances, including the Jerry Lewis Telethon show.  He has been featured at many blues festivals, including the Orange County/Newport Beach Blues Festival, and performed with blues legends B.B. King, Etta James, Bobby “Blue” Bland, and Clarence “Gatemouth” Brown as well as artists Luther Ingraham, Bobby Womack, Zapp and Roger – and the list goes on.

In 1997, Fuzzy was the featured artist at a special dedication to T-Bone Walker by renowned international artist John DeMarco.  In 1999, he was lead guitarist in the award-winning musical production It Ain’t Nothin’ But the Blues written and produced by Ron Taylor, Charles Bevel, Lita Gaithers, Randal Myler, and Dan Wheetman.  The revue traced the history of blues music with more than three dozen songs.  Originally produced at The Denver Center for the Performing Arts, Fuzzy participated in the San Diego Repertory Theatre production.  Ultimately, the cast played to audiences in playhouses across the U.S. (including on Broadway in New York) and in Europe.

On the political side of things, Fuzzy was invited to perform at the Spreckels Organ Pavilion in Balboa Park for President Bill Clinton.  In 2007, Fuzzy was asked to perform at a special event for then Senator Barack Obama prior to his formal announcement of his candidacy for President of the United States.  Fuzzy again performed by special request following the announcement at a private campaign fundraiser and then again at the El Cortez Hotel celebrating the win.

Fuzzy has studied and listened to all styles of music, but jazz artists George Benson, Earl Klugh, Lee Rittenauer and Al DiMeola were especially influential, as can be heard on his jazz CD, Stirring Up the Mix, released in 2005 under his given name, Lenny Rankins.  The album featured 10 original compositions written and produced by him.  The music received airplay on Smooth Jazz 98.1 (KIFM radio), Jazz 88.3, KJJZ, and others and was nominated in the Best Jazz Album category at the San Diego Music Awards.  Lenny performed various songs at 4th & B, where he opened for saxophonist Alfonzo Blackwell at his concert appearance in San Diego.  Lenny, a frequent featured performer at KIFM (Smooth Jazz 98.1 FM) events, was a featured artist at multiple KIFM Smooth Jazz Festivals.

Fuzzy has played backup guitar and worked with many artists throughout his career, such as Ike Turner, Jeanette Harris, Mindy Abair, Wayne Holmes (George Duke’s engineer), saxophonist George Howard, Jewel, and gospel artist Tonex.  Fuzzy did session work with producer David Kershenbaum for the Color Me Badd album featuring artists Peabo Bryson, Al Green, Montel Jordan, and others.  Fuzzy continues to do session work with artists in the studio.

In 2002, Fuzzy and business manager (Cheryl Peters) formed MoonCook Productions (MCP).  10 artists (R&B, jazz, blues, hip-hop, rap, and gospel) were under contract to work on their individual solo projects.  The lyrics were written primarily by the artists, but the music was composed and produced by Fuzzy.  A compilation CD featuring each artist was showcased and released in December 2003.  In addition to Fuzzy’s role as composer/producer, music videos were produced by him for each of the artists and were aired nationwide on the Rhythms music video show.

In 2004, Fuzzy became an active member of the Blues in the Schools program, playing guitar and singing with the BITS Band.  In 2012, he expanded his involvement as a lead teacher (guitars, keys and bass) to include the Blues Camp created for youth interested in the blues.  In 2017, he was asked to be the producer of the concert that highlights for parents and friends what the students have learned during the Camp.  In addition to his involvement with BITS and the camp, Fuzzy has participated in multiple music programs as a teacher and leader for youth programs and churches based in San Diego and Los Angeles.

Lenny “Fuzzy” Rankins represented Blues Lovers United San Diego (BLUSD) in 2014 and 2018 and the Southern California Blues Society (SCBS) in 2019 at the International Blues Challenge (IBC) held annually in Memphis.  In both 2018 and 2019 he advanced to the semi-finals, placing in the top 40 out of 200+ competing blues bands from around the world.

Fuzzy has played several festivals over the years, including the Doheny Blues Festival.  In 2015, he toured and performed at venues in the UK, including the Maryport Festival.  In 2016, Fuzzy accompanied jazz pianist Mikan Zlatkovich on a tour in Serbia where he played at the North City Jazz & Blues Festival.  In 2018, Fuzzy was invited to play on the Performance Garden Stage at the Britt Music & Arts Festival (Jacksonville, OR) in advance of Peter Frampton taking the main stage.  Fuzzy has played multiple years at the Gator By the Bay Festival (San Diego) and was a featured artist at the 2018 Tijuana Jazz and Blues Festival and the 2018 Signifyin’ Blues Festival in Los Angeles.  He will be appearing at the Henderson Blues Festival (Henderson, NV) featuring Kenny Wayne Shepherd and Beth Hart in April 2019, Gator by the Bay (May 2019), and again at Signifyin’ Blues in November 2019.

Fuzzy’s newest blues CD, Fuzzy – The Blues, was released in October 2017.  As with each of the other releases, the album was nominated in the Best Blues Album category at the San Diego Music Awards.  The album is receiving airplay throughout the U.S. and in Europe.

Lenny “Fuzzy” Rankins is an artist whose dynamic stage presence captures audiences of all ages.  His musical talent has gained him recognition and respect of fellow musicians as well as his fans.  Do yourself a favor and PUSH THE BUTTON!